Already the tremors of recent days are shaking fear-fuelled ideologies out of the woodwork. In the US, senator Marco Rubio renewed talk of a ‘clash of civilisations‘. Political and media rhetoric of this kind simply amplifies the terrorists’ power by claiming that they represent an entire ‘civilisation’, generating fear and therefore the impact of their atrocities.

Such rhetoric risks alienating moderate Muslims, producing ‘us v them’ polarisation and calls for the harsh retaliations that the terrorists are seeking to bolster their recruitment drives. Sadly, the minimal press coverage given in the West to recent terrorist attacks in Iraq and Lebanon aids those trying to pretend that this is violence perpetrated by Muslims against non-Muslims, rather than showing us the reality of shared victimisation.

We will continue to fail in fighting violent extremism if we do not begin by addressing the real-world circumstances on which it is founded, including inequality, poverty and social injustice. In the UK, the right-wing media and political opportunists have also predictably attempted to hijack the tragedy to push an anti-immigration agenda and fear is being spread by the militarisation of policing on our streets and imagery that recalls Nazi propaganda at its worst. 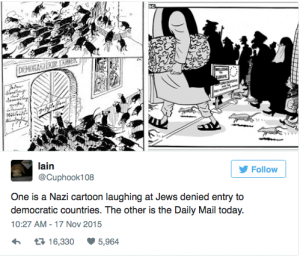 It is sadly predictable that the scapegoats being blamed en masse for the Paris attack are the refugee victims of Islamic State, something IS clearly intended. As my research with Glasgow Media Group shows, media misrepresentation of refugees and migrants is nothing new and has been used to drive through legislation that has hampered integration in our communities, including austerity cuts to public services, harsher conditions for migrants and attacks on the Human Rights Act.

In this climate, calls to close borders and blame refugees for the problems that they too are seeking to escape, may score easy points for some politicians or sell papers in the wake of an attack, but they won’t deal with the problems which led to the rise of IS and the recent migrant crisis. In fact, such calls actually distract us from the foreign policy failures that fuelled the rise of IS and have driven forced migration to Europe. The media’s bolstering of anti-migrant feeling also prevents resources going to help allieviate the poverty that makes refugees so vulnerable to exploitation.

While I was researching my recent book: “Propaganda and Counter-terrorism: Strategies for Global Change” I interviewed journalists, PR professionals and foreign policy, defence and intelligence personnel from the US and UK. It worried me that over the past 14 years, US and British government propaganda strategies and counter-terrorism policies appear to have been produced and reproduced in a bubble. Strategy is informed by a small circle of government-funded or affiliated terrorism experts, think-tanks and academics – with similar ideas and objectives.

These experts – and, of course, the politicians they advise – are over-reported in the media, too. This leads to the recirculation of the same ideas that have repeatedly failed us. The latest example of this is the UK government’s Prevent strategy – an ill-conceived programme which has been criticised by teachers, academics and NGOs for its harassment of Muslim communities.

Such strategies increase tensions in our communities, stifle academic freedom in schools and universities and increase feelings of alienation among Muslims in the UK. The all-too-frequent refusal of both the British and US governments to listen to independent social science stifles their understanding of the causes and therefore solutions for dealing with terrorism.

The bubble in which US and UK governments’ counter-terrorism policies have been created perpetuates a model of communication that is doomed to fail. For the book, former CENTCOM commander, Admiral William Fallon told me that the ‘huge disconnects’ that exist in understanding can be addressed in Iraq through ‘messaging’. He said: ‘You’ve got to start figuring out how you’re going to get in the people’s heads to get them to do what you want them to do’.

Both media and policymakers repeatedly ask: ‘How can we win the propaganda war?’ By reissuing the same old calls for the same failed strategies? I would argue not.

Top-down propaganda and a refusal to ‘listen’ cannot create lasting peace and stability. It divides us and prevents intercultural understanding.

In 2009, Colin Powell’s former chief of staff, Lawrence Wilkerson, stressed to me how skillful General David Petraeus (who succeeded Fallon as chief of CENTCOM) had been in his use of statistics and propaganda that had ‘lulled us into taking Iraq off the front page’, distracting public scrutiny while Wilkerson could see that: ‘Iraq has not changed, majorly, in terms of its political disposition and where it might go into the future’.

Chilling words, given the subsequent rise of Islamic State. The lack of transparency and debate has facilitated the developing crisis and greater understanding of the value of independent academic expertise would, in the long term, produce more robust solutions.

What we need is to see how recent events have been fuelled by our own flawed policies and a media that focuses less on headlines than showing us the truth. 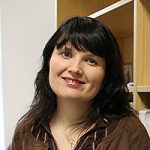 Emma Briant is Lecturer in Journalism Studies at the University of Sheffield. Her research interests are in the areas of propaganda, influence and censorship in the US and UK, war reporting, counter-terrorism and governmental adaptation to a changing media environment. Her doctoral research examined Anglo-American counter-terrorism propaganda and ‘strategic communication’ since 2001, which is now the subject of her new book Propaganda and Counter-terrorism: Strategies for Global Change. Her other recent published research includes analyses of media coverage of disability and asylum in the UK with the Glasgow Media Group where she worked before coming to Sheffield.