With increasing political divisions in Libya and ongoing civil war, social media websites and interactive media have been used to deepen the conflict and feed violence among Libyans. Political differences and disputes have been transferred from the real world to the virtual world and, in some cases, vice versa. The past four years have been a time of political upheaval and reform in Libya. The reasons for the changes are varied, but they include the high rate of unemployment among the youth and government corruption. However, the use of social media by anti- and pro-government groups alike has been widely publicised, to the extent that some commentators suggest that social media have been afforded too much credit for the political changes and reforms taking place in the country. Nevertheless, social media sites have become a critical outlet for describing and documenting attacks, coordinating protests and communicating information and news to local and non-local audiences.

The problem with social media use in Libya goes back to early 2011, when (anti-government) activists used sites such as Facebook, Twitter and YouTube to recruit young people against Gaddafi’s regime. This can be seen as a turning point in the history of Libyan media and in the relationships or social divisions between Libyans themselves. Some believe that these calls to action were somehow successful in changing the Libyan political landscape. However, since then, these social media platforms no longer play the same role ‘fairly’, as they have altered the way they use news and information and how they communicate with other users. Since the beginning of political pluralism and the emergence of dozens of Libyan parties and organisations, no one could predict how social media sites would become platforms for strife and polarisation, a way to carry out political purges, and a means to verbally abuse, insult and slander members of other parties or organisations. They have thus become a tool with which to threaten others and for the promotion of hatred and incitement to violence. Many Libyans’ pages on social media sites feature an abundance of hate speech and threats against other factions and divisions. In fact, every day, Libyan social media is filled with controversies, conflicts and rumours. This has increased discourses of insults and verbal abuse in the country’s political scene, reflecting the widely divergent political views and territorial conflicts taking place in Libya.

Libyans themselves have recently expressed regret about social media platforms having transformed from something which had great merit in supporting change in the country by means of uniting and serving Libyans’ shared goals into a cyber space which promotes chaos, fuels strife and targets individuals in political parties  or from other tribes. Since the Libyan uprising in 2011, social media sites have teemed with suspicious pages and bloggers’ accounts. There are now electronic groups and militias such as ISIS and Jihadists behind the use of social media to spread hatred and unrest and to increase the level of division between Libyans for their own purposes. These electronic groups and militias unfortunately have supporters and followers who believe in their messages and post or tweet for them. What is happening in Libya today can therefore be regarded as a direct result of what has been posted on social media, particularly on Facebook pages.

Increasing numbers of Libyans, especially young adults, have day after day started following social media more closely, in particular, Facebook and Twitter. Statistically, the number of social media users in the country jumped from around 360,000 in 2011 to over one million users in 2016. Libya now ranks tenth amongst Arab countries in terms of the number of Facebook users, despite the widespread lack of internet access and electricity. Consequently, Facebook has become the most widely used cyber space platform in Libya. This means, on the other hand, that all of the speeches condoning violence pass through this platform. This eruption of violence over the last few years constitutes a major threat and has had a role in shaping the future of the country. This also indicates that one of the main reasons for the continuing violence and chaos in Libya is the content published on social media platforms.

In the last few years in Libya, a number of activists, journalists and human rights defenders, such as Muftah al-Qatrani and Salwa Bughaighis, have been assassinated or abducted based on their activities on social media sites. They were followed and their activities on their personal accounts were monitored in addition to other actions. The killing of these activists is the latest in a string of attacks on politicians, activists and journalists who have spoken out against the actions of certain militias. The point is that these acts have been encouraged and organised through social media. It can be argued that the chaos promoted on social media sites is linked to users being young, and therefore lacking maturity and culture. Those young users seem to have been ‘brainwashed’, as they are ready to respond to any calls for violence against others who may have different political views. The situation in Libya thus indicates that social media are a double-edged weapon, which have turned into frightening tools through users’ misuse of the free flow of information. Rather than using them productively, many harness them for demolition and to create chaos.

After the fall of Gaddafi’s regime and the emergence of political parties (whereas before there was only one), several changes took place, such as the way people use social media for either political mobilisation or social polarisation based on tribes and regions. The content that users in the country post and tweet tends to foster bigotry and extremism towards others rather than reconciliation. Ideally, cyber space would be used as a tool for communication with others and for respectfully and peacefully debating the country’s problems and solutions. Most Libyans have, by now, realised that after having only one party and joint mobilisation calls in one direction (Gaddafi’s system), many calls are now made from one group against other groups, each one reduced to defending its existence. Hence, the negative values of social media have become clear and have caused a split in the fabric of the country, as they are used without any legal controls or moral scruples. It seems that, as a result, social media have become a problem in their own right and an aspect that should be taken into great consideration.

In light of the growing risks posed by social media, especially to the social structure of Libyan society, and their negative effects, it can be argued that such platforms should be subjected to legal control procedures to ensure that they are not used for incitement to commit violence or crimes, or for threatening society, especially in times of crises and conflicts. If no legal action is taken to safeguard users, it would only encourage more use of these sites to incite violence and undertake personal or partisan purges. I would finish with this quote: “We were happy, there was hope but now even that hope has started to fade.” 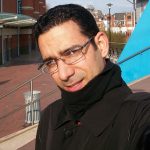 Mokhtar Elareshi is a Lecturer in Media and Communication Studies. He has taught at University of Tripoli and was Head of Department of the Department of Media at Azzaytuna University (2003-2006). He earned his PhD at the Department of Media and Communication, University of Leicester. He is the author of News Consumption in Libya (Cambridge Scholar, 2013) and the co-author of The Future of News Media in the Arab World (LAMBERT, 2013). He has written and reviewed journal articles in Arabic and English. His research interests include news consumption, young adults’ media habits, new media and satellite TV. He can be found tweeting as @Mokgad.