The publicness afforded by social media creates a paradox in terms of citizen expectations of privacy. While many appear to be comfortable with disclosing personal information on their Facebook and Twitter profiles, they remain wary and suspicious of efforts by government to intercept and use such data without their permission to do so. The subsequent need to ‘manage’ their online persona becomes an everyday activity for many social media users, even though they appear to be unable to guarantee the privacy of their personal information held by these sites.

This reflects the complexity of privacy in the digital age. Researchers should as Miller (2011) has gone as far as to suggest that contemporary notions of personal space do not exist in online environments. Users of Instagram, for instance, appear to engage in a collective ‘self-violation of privacy;’ they frequently share intimate details of their daily lives and provide personal information, such as their contact details, to a potential global audience. This publification of an individual’s private life stretches Foucault’s conceptualisation of the panopticon; physical activities such as ‘watching’ and ‘witnessing’, now replaced by the use of sites such as Instagram to piece together where people are, what they are doing, what they ate and with whom. There are broadly three main reasons why people choose to look at photos shared by users on Instagram: for visual pleasure, for imitation and for entertainment.

Instagram appears to function as a participatory panopticon. Instagrammers accept that their photos will be subject to some form of surveillance by other users and engage in these activities themselves. This is what Marwick (2012) refers to as ‘social surveillance,’ whereby users not only share content with the expectation that it will be viewed by others, but also strategically manage their online identity in order to appeal to an imagined audience. This also leads to what Whitson and Haggerty (2008) refer to as ‘the care of the virtual self,’ with Instagrammers constantly feeling the need to scrutinise what they, and their peers, upload to the photosharing site. In effect, privacy becomes almost a secondary concern for some users who perceive that being watched makes them ‘part of something.’

Depending on the context, users will disclose and redact personal information in order to connect with others, as well as to protect and reinforce existing social boundaries. In some cases this may even involve saying or doing something controversial on social media in order to gain attention from other users. Social media are also widely used as marketing tools for self-promotion by celebrities and reality television stars. For example, Kim Kardashian recently posted a nude selfie (see Figure 1) that generated many media headlines in March 2016. Good Morning Britain presenter Piers Morgan.branded Khardashian ‘desperate’ and ‘frenzied’ for sharing the image, which she was forced to censor with black bars due to. Instagram’s community guidelines.. These are increasingly normalised behaviours for millions of people worldwide, whose lives are increasingly mediated through sites such as Facebook and Instagram.

A related concern might be that users of social media sites rarely, if at all, pay attention to how these companies may use their personal information. Instagram users appear to be only vaguely aware of the terms and conditions that they have accepted in order to use the site, with many admitting to having never read this document in full prior to signing up. Indeed, the majority of Instagrammers appear to accept that they will need to sacrifice some form of personal privacy in order to benefit from the ability to share photos via the site. One manifestation of this is that these users engage in a form of self-censorship of their photosharing activities; photos of locations and individuals e.g. family and friends deemed unsuitable for public consumption are not uploaded and shared via Instagram (see Figure 2).

My research on Instagram suggested that users often display a ‘carefree’ attitude towards the protection of their privacy on Instagram. For example, one of my participants joked: ‘Well, regarding privacy I am totally convinced that once you are on the Internet, just from the first time you get into it your privacy falls down, falls totally. […] I mean, since the moment I signed up on Instagram I have an open account even because otherwise it just does not make sense to me. I say… I am not interested in privacy’.

My findings suggested that there was a passive acceptance amongst users of the absence of personal privacy on social media platforms. Self-regulation was perceived as the most effective way to protect their personal information. The normalisation of surveillance practices online leads users to be concerned only about their visual contents. Interpersonal surveillance has emerged as a pleasurable daily ritual for users of Instagram. While it would be easy to characterise this as a form of voyeurism, my research suggests that this is a purposive act to gain information from the images shared on the photosharing site. Instagram enriches users’ visual knowledge of diverse subjects such as landscapes, food, colour, and shapes. The ‘Big Everybody’ facilitated by social media has seen users willingly sacrifice their personal privacy in order to gain information about the world. 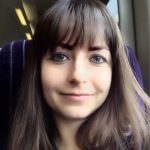 Elisa Serafinelli is a Research Associate at the University of Sheffield (UK) working on the European Commission Horizon 2020 funded project ‘IMPROVER: Improved risk evaluation and implementation of resilience concepts to critical infrastructure’. The aim of the study is to explore how information shared via social media can help reduce response and recovery times and raise awareness about the risk of future disasters. She completed her PhD in Media, Communication and Society in 2015 at the University of Hull (UK) with a research project on smart mobile technologies, visual communication and social practices titled: New mobile visualities and the social communication of photography: Instagram as a case study. Her academic research focuses on investigating the relationships between mediation, mobility and visuality in order to understand how smart mobile devices are altering humans’ perception and visual experience of the surroundings.