I guess we could just say, fuck the patriarchy, and that would be the end of the post; it’s a simple expression of protest. But then I may need to provide a few more words…

Femen, Everyday Sexism and Slutwalk are just three examples of movements that in their own ways send very clear messages of resistance; rejection; and strength. And yet, despite years of feminist/women’s advancement, we still have those who deny the existence or the opportunities afforded by feminism.

Without feminists, in the UK, women would have no right to vote; thanks to the women who were forcibly fed nearly 100 years ago. Without women’s activism rape in marriage would still be legal (and it was in the UK until 1991). Women’s activism has led to campaigns to eradicate unwanted sexual behaviour on public transport (Project Guardian) and the abolition of the TamponTax. Without women’s activism we would not have an Equal Pay Act, or indeed many of the rights that women in the West now take for granted (or have been ‘granted’).

So when we hear women assert ‘I am not a feminist’ or ‘I am not one of those shouty feminists’ it does give us pause to think: Really? Because it was by feminism, it was by activism, it was by shouting, that women were able to effect the changes that have loosened some of the shackles on women’s lives.

Of course, the history of feminist thought has not been without its own problems. Perhaps most significantly the assumption of second wave feminists that all women’s experiences were the same as the white middle class writers who articulated it. (For a beautiful articulation of this see bell hooks). At the same time, the existence of tensions and debates within feminism does not negate its utility or purpose, rather it enables us to see myriad ways in which the patriarchy is manifest. The problems that feminism has had to work out demonstrate that, rather than being some idealised abstract project, feminism is about real people reacting to the individual social, political, cultural and economic contexts in which they find themselves. The tensions within aspects of feminism actually legitimise it as a collective of egalitarian projects belonging to the multifarious men and women, around the world and throughout history, who seek to question and challenge the shifting guises and/or manifestations of patriarchy. As patriarchy has evolved and mutated into new forms, so must our response. Now we must say: fuck patriarchy.

The existence of contemporary feminist literature and movements, also remind us that there is still work to do. And this work is taking place within the academy, and beyond. Within the academy we are encouraged to present our arguments as nuanced and subtle; this is also the case in public discourse. Healy argues that nuance also ‘obstructs the development of theory that in intellectually interesting, empirically generative, or practically successful‘. In short, nuance works to shore up and diffuse, rather than challenge or destabilise the status quo. Feminism in many of its forms encourages us to challenge, or at least, question dominant norms.

So if we do say, fuck the patriarchy, what is it that we express? Fuck is a word that is seen as offensive and upsetting. Yet isn’t the patriarchy upsetting and offensive? Where Female Genital Mutilation is still taking place, affecting an estimated 137,000 women in the UK (and these are the figures that are known about, and do not include those that are ‘hidden’); where rape is a weapon of war; where women are subject to daily humiliations and sexual violations because of their biological appearance (as documented by Laura Bates).That is pretty offensive; presumably more so than just a word.

So the expression fuck the patriarchy can be used to transgress, to oppose and to draw attention; and to express anger, as a way to mobilise. And so we can also use the phrase as a call to arms and rejection of the status quo, the systems of hierarchy and authority which bind, take up energy that may be better spent elsewhere; articulating the ‘here and now’. Collective action and articulation is powerful; it facilitates the reclamation of agency in the face of oppression.   I know too many women in professional roles who are exhausted by the obstacles, placed daily, in their way through the patriarchal structures in which they find themselves. Recognising there are other women out there who share this discontent, this rage, means this ‘fuck it’ attitude can be empowering in its own right; as has been demonstrated by the numerous women who have gone before us, willing to stand up and be counted and say: fuck the patriarchy. 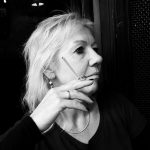 Heather Savigny is Associate Professor in Politics & Gender, in the Faculty of Media & Communications at Bournemouth University.  She writes broadly around the areas of feminism, media and politics and has a number of journal articles and books in this area; most recently in Feminist Media Studies and forthcoming in British Journal of Politics & International Relations.  She is currently working on a book Heavy Metal, Politics and Feminism; Sexy or Sexist. And she is utterly fucked off with the patriarchy.